David Browne writes an interesting article on the New Republic site about country music’s seeming total allegiance to the GOP, and how the lost election may cause the industry to do some back-room hashing out of the future of country music. I like how the article ends up, but doesn’t Brown know that Ralph Stanley, in many ways the living embodiment of traditional country music, endorsed Obama?

A few dates are upcoming for country music legend Dwight Yoakam, since he’s not officially “on tour” they are scarce as hen’s teeth:

If you’re in my old neck of the woods, New York City, get your holidays started right and head to The Rockwood Music Hall on November 25th to catch Mr. Joe Whyte live, in concert. Whyte will be debuting so new tunes and the show is free so get on out, you’ll be glade you did.

Popmatters.com has a review of the DVD “Bill Monroe: Father of Bluegrass Music” which they discribe as “Informative and educational, intriguing and entertaining, part American history lesson, part biography and part concert film…”

The good folks over at The 9513 brought to my attention that current Twang Nation favorite Jamey Johnson will be joining Willie Nelson, Neil Young, John Mellencamp, Dave Matthews, and Kenny Chesney (?!) for the 2008 Farm Aid music festival in New England on Sept. 20. Nashville Scene (High Lonesome Sound) and CMT.com(Don’t Tell Jamey Johnson That He’s “Too Country”) both offer features on Johnson.

The guardian.co.uk Music Blog has a brief run down of the current state of American alt.country/Americana scene (Are you ready for (more of) the country?)

Chrissie Hynde of the bad the Pretenders states that the bands first new album in six years (“Break up the Concrete”) will be “moving in a country direction.” Of all the country music carpet bagging that has been happening recently I have to say that a musician with Hynde’s credibility makes me think she’ll do it right, but she is a vegitarian, so does this mean that Jessica Simpson has to get another t-shirt?

From Country Standard Time: Don Helms, pedal steel guitarist for Hank Williams’ Drifting Cowboys, died this morning at 81. He is featured on more than 100 Williams recordings. Helms played a lap steel (also known as “Hawaiian steel”) guitar. This type of steel guitar lacks the foot pedals found on the more modern pedal steel guitar, which did not come into prominence in country music until after Hank Williams’ death in 1953.

Now go put on a Hank Sr. song (“So Lonesome I Could Cry” is a good one) and listen to the distict wail of Helms’ pedal steel.

A Smithsonian Institution exhibit on the roots of American music opens today in Shepherdsville, KY.

The Tennessean.com has a piece on a guy I like and will keep my eye on, Montgomery, Ala., native Jamey Johnson.

The New York Times reviews Loretta Lynne’s recent show in New Jersey. Even though Lynne was ailing from a recent back operation the crowd was charmed and captivated.

A great conversation by a couple of bonafide country music outlaws reminiscing about the good old days. From the piece:

JENNINGS: Nashville’s never going to change. They’re always going to be the same. They play by the rules. And it’s all still a pop thing. Nashville controlled it in the ’60s, ’70s, ’80s and ’90s. It was just the reckless people that did it their own way that broke out [into the mainstream].

COE: The greatest example of that is Charlie Rich. Charlie Rich was just coming off of Behind Closed Doors, which was the biggest fuckin’ record. And if you went up by Sony Records, they would tell you-you couldn’t walk in a building, you know. Because Charlie was in the building, they had the doors locked. Security had to check you out first before you could get in the building. Then they had the awards show. And he was supposed to read the winner of male vocalist of the year. And he just opened the envelope and read it and took his fuckin’ lighter out and set it on fire.

COE: Yeah. He refused to announce this guy as male vocalist of the year. And I thought it was the greatest fuckin’ thing I ever saw in my life. And you know what? You never heard Charlie Rich’s name again ever. That’s how powerful that town is. I just think music should be good or bad, period.

Props to retired oil man Larry Berry of Chandler, Texas for returning George Jones’ stolen acoustic Martin-000 guitar which he bought for $10 from two boys at his Fort Worth, Texas, apartment complex in 1962(!)

Berry said he’s been “trying to reach Jones since the 1960s to return it, and finally got through this year.”

The Possum will recieive the long lost instrument on June 14 when Berry will pesent him with the guitar at a performance in Bossier City, La.

What made Berry think that the guitar he bought belonged to Jones? The guitar’s strap had Jones’ name on it with streaks of “White Lightning.”

Yeah, that would do it! 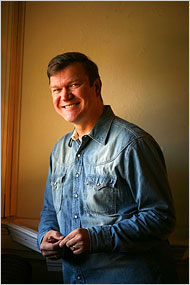 The Boston Globe has a nice feature (He’s country but he jumps genres with irreverence) on alt.country journeyman Robbie Fulks. A excerpt:

Fulks, who plays a duo show with his friend Robbie Gjersoe at Club Passim tomorrow night, says that hearing Chet Atkins do Blondie’s “Heart of Glass” on “A Prairie Home Companion” gave him validation for his obsessive urge to demolish musical barriers.

Curiously, he’s both country to the core and an incorrigible iconoclast. “I feel it’s an ongoing tension in my life,” says the singer, who parlayed the considerable buzz of his mid-’90s arrival into a steady, if largely under-the-radar, career as an “alt-country” mainstay.

The tension, he says from his Chicago home, isn’t between country music and everything else as much as it is between “genre and experiment.” Given the choice, he’ll jump the wall every time.