Deadwood fans are still cautiously giddy at the news of a full-length version of our favorite profanity-splattered Shakspereon western. Deadwood unceremoniously canceled on June 5, 2006 Fans were left with a fragmented and ponderous third season after creator and primary writer David Milch decided he wanted to work on the HBO surfer sap opera ‘John from Cincinnati.” (which was immediately canceled)

In the aftermath, Milch agreed to make a pair of two-hour television films, but HBO executives and the otherwise newly contracted actors at various times over the years put the odds of that happening as slim to none.

But good things come to hooplheads that wait and HBO announced a few weeks back that ‘Deadwood: The Movie’ was happening. This was backed up by W. Earle Brown, who plays Al Swearengen’s hang-dog muscle Dan Dority verified on Twitter that the movie was in post-production.

Then came an official announcement from HBO with a trailer. Canned peaches all around!

Today we get a full-length trailer (see below) trailer highlighting more of the excellent cast (Calamity Jane!) The trailer also treats us with the perfectly placed Colter Wall song ‘Sleeping on the Blacktop.” This is a nice treat though no surprise as Deadwood has always featured great roots music.

Wall’s song being included appears to have been taken him by surprise as he heard the news while working on his ranch. He responded on social media.

Got this news today while tagging a couple new calves. Deadwood was and still is my favourite show/series I’ve ever watched. The writing was always so brilliant, as was the acting. I couldn’t be happier about having one of my tunes in the trailer for the upcoming movie! Thanks HBO. This day just keeps getting better!

Though the news of a movie finally being released is cause for celebration it comes with the bittersweet revelation that David Milch is suffering from Alzheimer’s.

UPDATE>> Apparently Jason Isbell will have a cameo in the movie!

Since the mention in @RollingStone, its become public knowledge that @JasonIsbell visited #Deadwood set for a few days. There were always plenty of guitars around that set and it didn’t take much prodding for Isbell to pick one up. He and I started playing “Pancho & Lefty”… pic.twitter.com/bsKYDWqUhU

Colter Wall’s ‘Sleeping on the Blacktop” on his album “Imaginary Appalachia.”

I chimed in the chorus of the WTF! when Deadwood was prematurely deep-sixed by HBO in August 2006 and finally lost hope after following the Internet rumors of the back and forth between the HBO brass and the series creator  David Milch. I now believe that Milch did everything he could to save the series, but now it’s all just whiskey under the bridge.

So I was psyched to see a clip the other day for the upcoming FX series Lawman. FX has placed a 13-episode order the original drama series. It was  developed by Graham Yost (Boomtown, Speed) and stars Timothy Olyphant who portrayed the hotheaded sheriff  Seth Bullock on Deadwood.

Lawman is based on the popular Elmore Leonard character “Raylan Givens” featured in his short story Fire in the Hole. Yost, who created and produced the critically acclaimed NBC drama Boomtown, wrote the pilot and will serve as Executive Producer/Writer on the series. Leonard (Cuba Libre, Rum Punch, Get Shorty) will serve as an Executive Producer on the series  The pilot was shot in Pittsburgh and Miami, and series production will take place in Southern California beginning this fall. Lawman will premiere on FX in spring of 2010.

I only hope it’s half the show Deadwood was.

I’m really pleased with the recent crop of westerns that have hot the big screens as of late – 3:10 To Yuma, Appaloosa, No Country for Old Men – but there’s one in particular I’m looking forward to.

The Last Rites of Ransom Pride, co-written by Texas music legend Ray Wylie Hubbard, is a violent Western (the studio says it’s going to be “Sam Peckinpah meets Quentin Tarantino” ) set in the early 1900s about a woman trying to bring her lover, a murdered outlaw, home to Glory, Texas for burial. 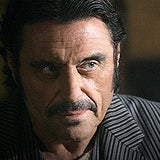 I read the other day that HBO was releasing the “Deadwood Complete Series” on December 9, 2008. The set contains the three seasons of this great. gritty and profanes masterpiece that HBO and creator/writer David Mitch collaborated on before it’s untimely and abrupt ending at the conclusion of it’s third season just when it was hitting it’s stride.  Part of the new package’s scant new bonus features is something called “The Meaning of Endings”narrated by David Mitch. I personally have not heard this portion of the DVD set, but my money is that this is gong to be Mitch trying to  justify abandoning a great series in order to do an unproven and short-lived one (John from Cincinnati.) The set is priced at $179.97 ($125.99  on Amazon.)

As a big fan of Deadwood, and someone that was bewildered by the short-sightedness of it’s cancellation, I have to look at this set and it’s lack of any new material (as well as the omission of Blu-Ray technology) and believe that HBO and Milch are just trying to cash in on the fans that they left hanging in 2006.

What a bunch of cocksuckers!