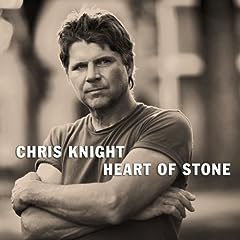 Before he became the equivalent of a hillbilly Che Guevara Steve Earle was the king of roots-rock. Since moving to New York City, and shunning his redneck past, the roots-rock division seems open for the next singer/songwriter able to blend introspective, populist narratives  fueled by an amped-up rock sound. Slaughters, KY’s Chris Knight‘s “Heart of Stone” makes a convincing run at that title.

Small people in small towns with little to hope for populate Knight’s landscapes. Enduring and overcoming economic and cultural obstacles that would make lesser souls crumble and succumb.

The classic tale of the road is told on the opener “Home Sick Gypsy.” Though there is a series of sexual liaisons alluded to it’s made clear that it’s rough and lonely going out there for the working musician.

“Hell Ain’t Half Full” is a raucous morality tale that cuts just as deep against the meth cooker as it does the preacher with nothing good to say. The song ends on a note of stark humanistic self-reliance for our moral salvation since “Up in Heaven above, God ain’t paying much attention at all.” Another Dollar is another moral tale, this time on greed, that is far too busy rocking to become sanctimonious.

“Something To Keep Me Going” is an electrified country song about love gone wrong where memories do as much to call him back to his ex-lover as they do to remind him why he needs to keep heading on down the road. The tile cut sets a story of rural abandonment of family and how hardships can shape a man for the worse. Knight uses the chorus to caution the listener to persevere and overcome and “Don’t break yourself on a heart of stone.” “Crooked Road” is introspection of a man that is, like Knight himself, from a coal mining town and trying desperately to leave the hard, dangerous work behind to save himself and his family.

“Hear of Stone” returns Knight with producer Dan Baird of Georgia Satellites (who produced Pretty Good Guy and The Jealous Kind) and Baird has the good sense to let well enough alone. With a vocal style reminiscent of a Southern Randy Newman Knight taps into what made country music (and later folk) great since the days of Jimmy Rogers and the Carter Family. Walking that delicate line that balances sentimentality with an iron core of earnest character to make it through another day.

In Nashville last year I was fortunate to catch Knight in a round table that included Southern fiction writers and song writers on how story-telling through the different mediums were alike. Like the great writer on the panel William Gay, Knight’s takes are stark in their telling and elusive in their seeming simplicity. It’s there that the common can become extraordinary.