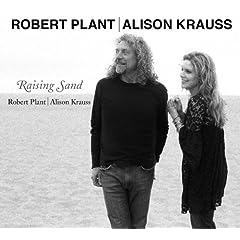 While Mssr. Plant and his partner in sonic larceny Jimmy Page spent most of their time pilfering Robert Johnson’s crossroads they never left the dirt roads to traverse the back woods and smokey mountains where Americana, country and roots music flourished. In plant’s own words “I completely missed a whole other area of amazing American music.”

The collaboration between the blonde bluegrass angel and blonde rock god was set in motion seven years ago when the two sang together at a 2004 Leadbelly tribute concert. The conduit to the to bring the project together came in the form of producer and musician T-Bone Burnett (‘O Brother, Where Are Thou’ and ‘Walk The Line’.)

The result is a moody hushed world where sepia tinted country, fringe-folk and swaggering rockabilly fuse into a surprisingly cohesive whole. Like an unlikely collaboration between Angelo Badalamenti and Sam Phillips the alchemy on these thirteen sparsely-arranged cover versions is raw and mesmerizing – Krauss sings like a shimmering Nightingale, and sets a perfect counterpoint to Plant purr and growl. In tandem, they frequently reach moments of true transcendence last heard when Plant dueted with Sandy Denny on Zappelin 4’s (or Zoso) haunting mandolin-driven folk ballad “The Battle of Evermore.”

As you might expect of a recording of this pedigree the musicians are top of the line. Burnett’s hired guns Marc Ribot (guitar), Dennis Crouch (bass), Jay Bellarose (drums) and Norman Blake (acoustic guitar) are solid but restrained. Burnett has a knack for perfecting the early country and roots high lonesomeness that conjures hard fate and hone-spun menace that can only be labeled dark Americana.

The covers are picked with care with attention to diversity and songwriting mastery. Doc Watson’s “Your Long Journey”, Tom Waits and Kathleen Brennan’s “Trampled Rose”, Gene Clark waltz “Through the Morning, Everly Brothers’ “Gone, Gone, Gone (Done Moved On)” and, most impressive, a discordant rendering of Townes Van Zandt’s “Nothing”and a Plant and Page number Please Read The Letter.”