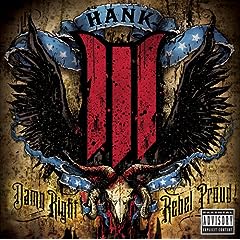 There’s a lot of things you can say about Shelton Hank Williams III, he’s profane, his lyrics are simplistic, he advocates substance abuse and a destructive lifestyle – my money would be that he would look you in the eye, give you smile and spit on your shoes.

The newest release by Hank III “Damn Right, Rebel Proud” follows the same breakneck path his last album “Straight to Hell” took us. Barrels of whiskey, bales of pot, cocaine, scraped knuckles, black eyes and gratuitous hell raising are the order of the day. And if it’s too loud (or fast) get the hell off the road.
The album wastes no time bolting from the chute with the arm jerker “The Grand Ole Opry (Ain’t So Grand)” which could be considered the rallying song for the “Reinstate Hank” campaign which Hank III spearheads. The tune levels a bead at the beloved Nashville institution for keeping Hank III’s grandfather, Hank Sr. off it’s membership (though he was the first performer to receive six encores at the Opry, in August, in 1942, the Opry’s WSFA fired him due to “habitual drunkenness.” Despite this firing the Opry continues to use the name and likeness of Hank Williams Sr. in promotional materials.) Name checking Johnny Cash, Johnny Paycheck, Waylon Jennings, Jimmy Martin, and III’s daddy, Hank Jr. (aka Bocephus)  III leaves no one wondering where he comes down on the issue.

The songs cover the familiar country music terrain of hard living and wild times – “Wild & Free,” “Me & My Friends,” and the honky-tonk moshers “Six Pack Of Beer” and “Long Hails & Close Calls,” the latter’s spirit owes as much to thrash metal (III played bass with Superjoint Ritual, a New Orleans metal band formed by Pantera vocalist Phil Anselmo) as it does Bill Monroe.

But it’s not all raising hell, fun and guns. Hank III is man that makes no apologies for his life choices and celebrates the causalities left in his Knowing this makes songs like “I Wish I Knew,” a stand lament for a lost love and the choices made that drove her away, along with “Candidate For Suicide” and “Stoned And Alone” all show III moving toward more reflective themes and a broadening his narratives and, yes, show he’s getting older.

III’s voice has always had a haunting, keening quality that harkins back to his grandad and skipped over his daddy’s baritone delivery. The whole package is perfectly held together by III’s passion and the crack band, especially Andy Gibson on steel guitar and Dobro and Johnny Hiland on lead guitar, which leaves most country, as well as punk and metal bands, in the dust.

iTunes has “Damn Right, Rebel Proud” classified under rock (It’s now been moved under the country music section), maybe it’s all the profanity that runs through the album that got it booted to another area. This release is just as deserving of the country music moniker as the pop-country fodder – Kenny, Toby, Carrie and Taylor – glutting the country section of iTunes country music section. For spirit alone it’s more deserving than most of what is found in any online classification, on the mainstream radio country charts and the mainstream country music industry at large (III;s label, Curb Records, declined to put their name on it, instead reviving the Sidewalk Records imprint to keep a safe distance from it.) Seems Hank III, like his legendary Granddad before him, is seen as a black sheep. Here’s to the rebels.