God’s Middle Finger: Into the Lawless Heart of the Sierra Madre | Twang Nation - The Best In Americana Music 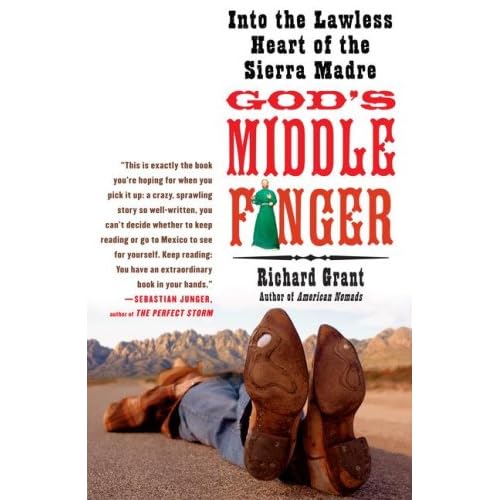 God’s Middle Finger: Into the Lawless Heart of the Sierra Madre by Richard Grant

It’s no great feat for a travel writer to make me long for white-sandy beaches, warm turquoise oceans and ice cold cervezas. It’s a much more challenging feat for a writer make me want to risk my life and travel up the Devil’s Backbone, Mexico’s violent and exotic Sierra Madre Occidental, where last of Geronimo’s Apache braves are rumored to have taken refuge and the birth and assassination local for Pancho Villa. Richard Grant, a ex-pat Brit and freelance journalist with a pair of balls as large as his sense of adventure and and equal measures of level of self-delusion and self-preservation has done just that.

When French surrealist André Breton visited Mexico he commented, “Our art movement is not needed in this country.” Grant gives truth to this statement with his fantastic book “God’s Middle Finger: Into the Lawless Heart of the Sierra Madre” by delving into a land of contradictions, desperate poverty, elaborate narco-mansions, and levels of casual cultural violence that can only be paralleled to America to the 17th century wild west or the current history of parts of the Middle East. People are killed, woman are raped and then forced to marry their rapist, goofd people are forced into raising “the crop that sells” just to feed their families and the locals shrug their shoulders in the existential futility of ” ¿Qué puede ser hecha?”

Poor farmers, forced by the drug cartels to grow marijuana and opium, are harassed by the police and military when rival drug lords pay them as muscle to destroy or simply steal their crops. These same families follow chains of revenge that wipe out entire families and the drug lords pray to their own “narco-saint”, Jesús Malverde, so the federales will not see their crops and that their bullets fly straight and true.

Young men are hired as narco-vaqueros and lurk the streets as muscle blaring narcocorrido (A Mexican version of Gangsta Rap) blaring from 30k trucks speakers and brandishing their “cuerno de chivo” which translate to “goat’s horn” and refers to the curved magazine clip in the armament of choice, the AK47. The danger is tweaked upward with handfuls of cocaine chased down by cases of beer and Lechuguilla, a variety of potent bootleg tequila that, if drunk right from the still, can permanently damage your throat.

It’s not all dire, the Gringo meets up with some interesting and funny characters not least of all author and real cowboy Joe Brown. And his direct translations of the colloquial curses are hysterical.

During his journey into the place where “first the event happens, then it is denied, and then the myths are created” Grant reflects on his bourgeois ennui that set him on his treacherous journey and ultimately attempts to make more out of it, something more noble then just a Gonzo walkabout. His attempts at nobility are arguable, but there’s no debate that it led to a great story.

One thought on “God’s Middle Finger: Into the Lawless Heart of the Sierra Madre”