Ashton Shepherd – Sounds So Good (MCA Nashville) – Like her Texas counterpart Miranda Lambert, Alabama native Ashton Shepherd serves up a gritty remedy for the sugary pop-confection emanating most recently from Carrie Underwood and Taylor Swift. Like Gretchen Wilson (without the goofy Muzik Mafia taint) Shepherd is a hell raising gal that calibrates good loving and a good time. Sure the release has producer Buddy Cannon’s Nashville sheen ladled over it like he does Kenny Chesney’s slop, but Shepherd shines through it with bad-ass glory. “Takin’ Off This Pain” puts all the cards on the table as a testament to women’s love woes. “I Ain’t Dead Yet” is a lovely Texas waltz about yearnings for good times in spite of domestic and maternal obligations. “Old Memory” is a slow burner that dwells on lost love that makes you forget the lady is only 21 years old. This is unabashed country music gold! 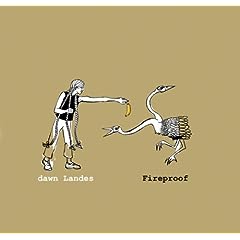 Dawn Landes – Fireproof (Cooking Vinyl) – Brooklyn by way of Louisville, Kentucky native singer/songwriter/producer Dawn Landes travels the same quirk-folk roads as her contemporaries Feist, Joanna Newsom and Chan Marshall (Cat Power) and like them she makes music that is both bold and subtle. On her second album, Fireproof, Landes hit a spot between the traditional and the contemporary. Like T. Bone Burnett producing The Breeders.

Singing with a voice that reflects a whispery-fragile grace reminiscent of Hem’s Sally Ellyson (some of the members of Hem appear on the release as well as members of The Earlies) and Suzanne Vega. Landes also plays everything from guitars, Optigans to bells and uses her experience as a producer to blend and fade between styles while preserving an overall mood of beauty veined with menace.

“Bodyguard” opens kicks things off like some kind of Appalachian beatnik mutation with it’s circular phrasings of “Where’s my bodyguard..” and “I saw a man, I saw a man, I saw a man..” it sublimely creepy. “Picture Show” has a Tom Waits scratchy junkyard carnival vibe that wobbles and skews under beat poetry. My preference for music with an open smile instead of a smirk and songs like “Tired Of This Life” and and the pedal steel tinged “Twilight” exhibit a simple, honest beauty that is reminiscent of Joni Mitchell.