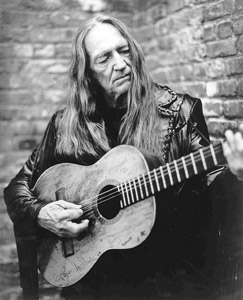 Billboard.com reports that Legacy Recordings will celebrate Willie Nelson‘s 75th birthday (April 30) by rolling out a series of special projects. The first is the April 1 release “One Hell of a Ride,” a four-disc, 100-song boxed set.

The set bundles together music from Nelson’s stints with numerous record labels, beginning with tracks recorded in late 1954/early 1955 for KBOP radio in Pleasanton, Texas.

While the track list is still coming together, look for early 1960s takes on “Night Life,” “Funny How Time Slips Away” and “Crazy” plus iconic covers like Fred Neil’s “Everybody’s Talkin’,” Hoagy Carmichael’s “Stardust” and Fred Rose’s “Blue Eyes Crying in the Rain.”

Liner notes were penned by Joe Nick Patoski, whose Nelson biography, “An Epic Life,” will hit bookstores this spring via Little, Brown.

And of course Nelson’s new studio album,the Kenny Chesney and Buddy Cannon co-produced “Moment of Forever,” is due Jan. 29 via Lost Highway.

Look for Willie on the road until the end of time.