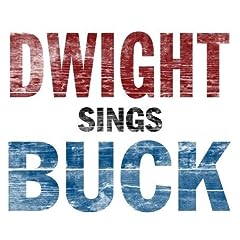 Some things are naturally occurring, Texas Summer heat , death, taxes and Dwight Yoakam at some point in his career would release an album of covers by his mentor and friend Buck Owens.

After his fist release Dwight was soon introduced to the Texas native and they collaborated on Buck’s revived “The Streets of Bakersfield” to top the charts in 1988. The two stayed good friends until Buck Owen’s death on March 25, 2006 of a heart attack only hours after performing at his Crystal Palace restaurant and club.

Since releasing his first major label debut “Guitars, Cadillacs, Etc., Etc.” in 1986 Yoakam has been the heir apparent of the twangy, electrified, rock-influenced flavor of hardcore honky-tonk entitled the Bakersfield sound (from it’s regional birthplace Bakersfield, CA.) and made famous by Buck Owens and Merle Haggard. Like it’s mountain cousin Bluegrass, Bakersfield is the kind of music that separates the country music aficionado from the tourist. It wears it’s hillbilly roots on it’s Nudie suited spangled sleeve while also using rock arrangements and technology to move forward.

The Bakersfield sound was also a bracing counter to the syrupy country-pop being produced in Nashville in the ’60s. Yoakam was able to deftly revive the sound in the ’80s in reaction to the very same insipid country music environment.

Now comes the inevitable and precisely if obviously titled “Dwight Sings Buck.” A reprisal of fifteen of Buck Owens’ greatest releases including 11 top five hits, eight of which reached #1 on the country charts, spanning 1956 to 1967. Though there are no real stretches or deviations with Dwight’s arrangements of these familiar classics, there are some pleasant tweaks here and there.

The release kicks things off with a bang with “My Heart Skips A Beat” to let you know just what is in store. Rave up electrified guitars twang out a solid back beat. The songs melts deftly into “Foolin Around” with an even faster beat and innocent double entendres. The breadth of this release and Dwight masterful delivery of the songs reminds the listener just how influential Buck Owens was and how his Hee Haw corn–pone persona allowed people to dismiss him as the innovator he was on country and rock.

“Only You” is a cut with a noticeable difference in arrangement. It’s still a slow loping testament to lost love but Dwight starts out the song with an organ bringing to mind a church procession. The song then moves into a waltz and Dwight’s voice aches, cracks and brings out the lonely ache of wanting in the song’s lyrics.

That same ache also occurs on Dwight Sings Buck’s first released single “Close Up The Honky Tonks.” That ache that is at once lonely and comforting when you realize someone is out there putting these universal feelings to hillbilly poetry.

This Fall is shaping up to be a great one for country fans, Dwight Sings Buck is the joyous and passionate release on the top of that list.