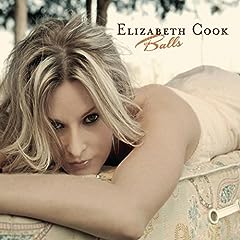 Balls is the boldly titled release by Wildwood, FL. native Elizabeth Cook. With singer, songwriter and ex-guitarist for Emmylou Harris’ Hot Band Rodney Crowell sitting in as producer the release has one boot astride in contemporary swagger and one firmly planted in tradition.

I’m new to Ms. Cook, but apparently she’s been around a spell and is the hottest thing I never heard of. She made her Grand Ole Opry debut on March 17, 2000, and appeared repeatedly thereafter, which is a remarkable achievement considering that, at the time, she was an indie artist with zero radio airplay.

The album kicks it off right with “Times Are Tough In Rock ‘n’ Roll” – A celebration of country music bounces along with a jaw harp boinging throughout. The song softly disses on rock music, thought with the singling out of Britney Spears I wonder if it’s really pop music that is being tarheted with this fun tune.
“Don’t Go Borrowin’ Trouble” follows with a slow-burning lament that looking for bad times leads to you just might finding some.

The song that begets the title, “Sometimes it takes Balls to be a Woman” is next – Like many great country songs recorded by woman it’s both boldly declarative and coyly playful. A nice shuffle and some mean guitar work by the Nashville master Kenny Vaughn drives this baby all the way home. Cook does a shout out to Loretta and Dolly just to let folks know she knows who paved the path she’s now gracefully walking.

“He Got No Heart” is a slight boom-chucka tune about some no good dude that’s done this girl no good (he got no heart/his mama forgot that part) and makes feeling bad a lot of fun.

“Mama’s Prayers” is a pious tear-jerker about mama loving her while she’s out in this mean ‘ol world that wins because of it’s sincerity.

“What Do I Do” is a great song in the vein of classic Tammy Wynette of love on the skids.” Gonna Be” is a toe-tapping song of gumption and wherewithal.

An independent sprit shines throughout this fine album. Cook has a voice that is as clear as a crystal pond and strong enough to belt out a song that leaves the Underwoods and Wreckers in the dust. It’s easy to draw a line in the country lineage from Loretta and Dolly to Elizabeth Cook.